A French-English dictionary compil'd by Mr. Randle Cotgrave : with another in English and French. Whereunto are newly added the animadversions and supplements, &c. [etcetera] of James Howell .... 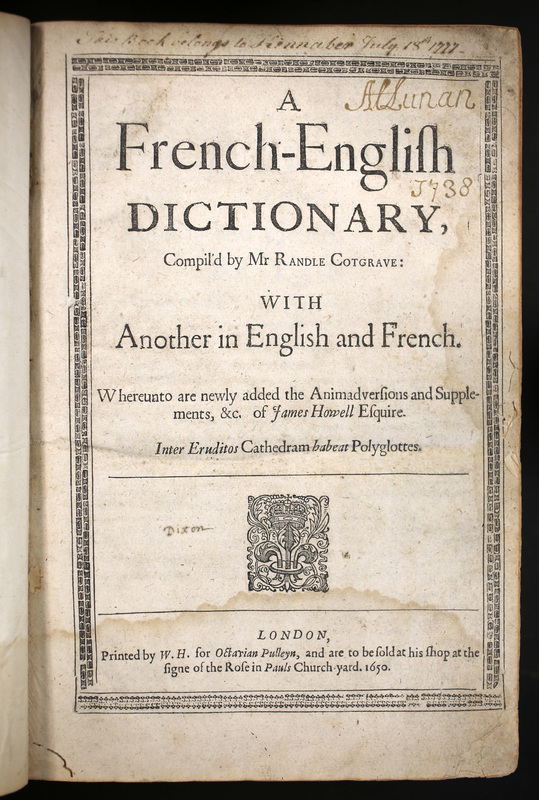 A French-English dictionary compil'd by Mr. Randle Cotgrave : with another in English and French. Whereunto are newly added the animadversions and supplements, &c. [etcetera] of James Howell ....

Printed by W.H. for Octavian Pulleyn

CONDITION:
Leather over laminated paper board. Book has been rebound in the 19th century. Borders are embossed with a vine pattern that is also on the inside of the boards. Both covers have separated, but the leather on the spine is still well attached.

A bookmark that was once attached to the binding has detached and now rests between 3Z1v and 3Z2r.

The lower third of all pages has mild water damage which does not interfere with the text.

On title page there are several hands: In one is written “This Book belongs to Kinnaber July 18th 1777.” In a different hand is written “AlSunan [?] J738.” A third hand has written a note near the title page wood cut.

CONTENTS:
a2r - The Epistle Dedicatory To the Nobility and Gentry of Great Britain - by James Howell

d1v - A Dialogue twixt Sylvander and Clorinan consisting of some extraordinary and difficult criticall Phrases which are meer Gallicismes, and pure Idiomes of the French toung.

d4r - To the Right Honourable and my very good Lord and Master, Sir William Cecil Knight Lord Burghley, and sonne and heire apparent unto the Earle of Exceter - Randle Cotgrave

A1r – A Dictionary English and French; Compiled for the commoditie of all such as are desirous of both Tongues

2G4v – Fore the ease of the French Student, and the further advantage of his memory, the heads of some species are collected and annexed hereunto

Featured in:
Guides Into Tongues: Multilingual Dictionaries and Grammars at CRRS 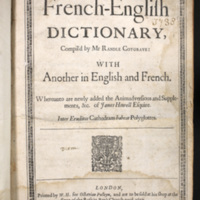 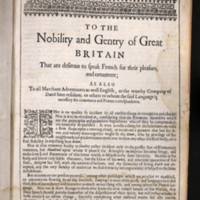 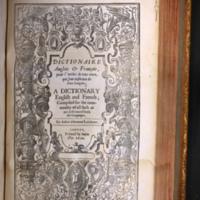 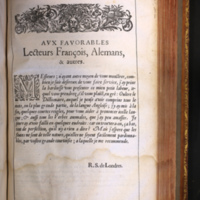 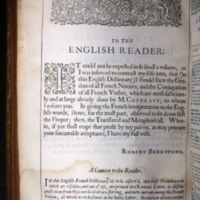 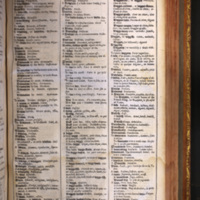 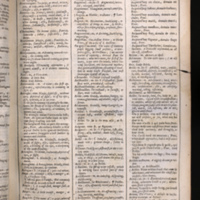 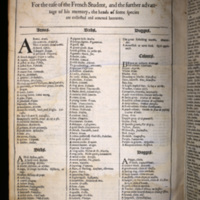 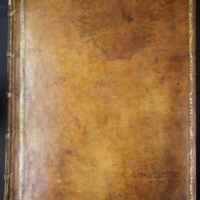