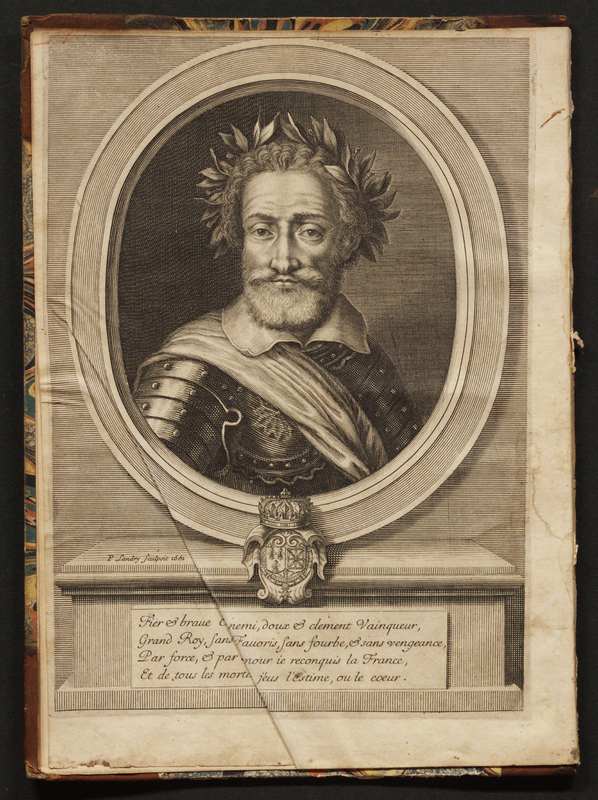 Our odyssey into the print culture of France during the Ancien Régime begins with Henri III (1551 – 1589), the last King of the Valois dynasty in France, and the predecessor to Henri IV. Widely reviled during his reign as King of France and briefly King of Poland and Grand Duke of Lithuania, Henri III was assassinated by Jacques Clément, an extremist Catholic in 1589. Although Catholic, Henri III angered many in France when he signed the Edict of Beaulieu, which provided many rights for Huguenots--French Protestants.

Further, Henri III incited widespread outrage across France when he murdered the very popular Duke of Guise and his brother, the Cardinal of Guise (Louis II), as well as incarcerating the duke’s son. As a result of criminal charges brought against him by the Parlement of Paris, Henri III allied himself with the man who would become his successor, Henri of Navarre. When word of Henri III’s murder spread through France, most people reacted with joy. Henri III produced no children, and after controversy over the succession among three main contendors, the throne went to Henri of Navarre, who became style as Henri IV, King of France and Navarre.

Known as Henri le Grand in French or “Good King Henry” in English (le bon roi Henri), Henri IV (1553 – 1610) was the first monarch of what would become one of the most celebrated and famous French dynasties, the House of Bourbon. It is worth noting that Henri IV was despised during his lifetime just as much—if not more—than his predecessor, and that his popularity came after his death. One of the reasons for this disdain among the populace was owing to the fact that Henri IV was a Protestant despite having been baptised as a Catholic [1].

The commonly held belief at the time—particularly by the powerful Catholic League—was that the King of France should always be a Catholic, so, facing great pressure, Henri IV converted to Catholicism to appease his detractors. In spite of this, he put into motion one of his most famous laws, the Edict of Nantes, in 1598. This act gave Protestants religious freedoms in France, and it ended the Wars of Religion. In spite of this, he never gained universal approval. Some Catholics believed he usurped the throne while certain Protestants considered him a traitor for converting to Catholicism. Henri did not succumb to the dozen or so attempts to kill him, but in the end, he shared the same fate as his predecessor when another Catholic fanatic, François Ravaillac, assassinated him in 1610.

Henri IV’s accession to the throne represented a continuation of the desire on the part of previous monarchs, including Henri III, to make France an absolute monarchy, meaning the King would have power over all and essentially be above the law . Henri III’s death signalled the end of the Valois dynasty, and Henri IV was the first king of the House of Bourbon. Although a staunch Protestant, Henri IV’s forced conversion to Catholicism (followed by his subsequent shift back to a Protestant) marked a tenuous beginning to a reign. He also inherited an increasingly complex French political landscape. The one individual who represented this best was his predecessor’s mother.

Catherine de’ Medici (Catherine de Médicis) (1519 – 1589) of the famous de’ Medici family in Europe was the mother of Henri III. Half Italian and half French, she was a staunch Catholic who fiercely tried to ensure the continuation of the Valois dynasty, which included a desire to unite the Valois and Bourbon interests of Spain. Catherine wished for her daughter, Margaret of Valois (1553 – 1615), to marry Henri IV. Despite some challenges, Catherine managed to negotiate this marriage with Jeanne d’Albret, the Protestant mother of Henri IV. Although one of Jeanne’s conditions was that she would agree to the match only if Henri IV could remain a Protestant, Catherine did not seem to pay much heed to this request or may have feigned doing so. 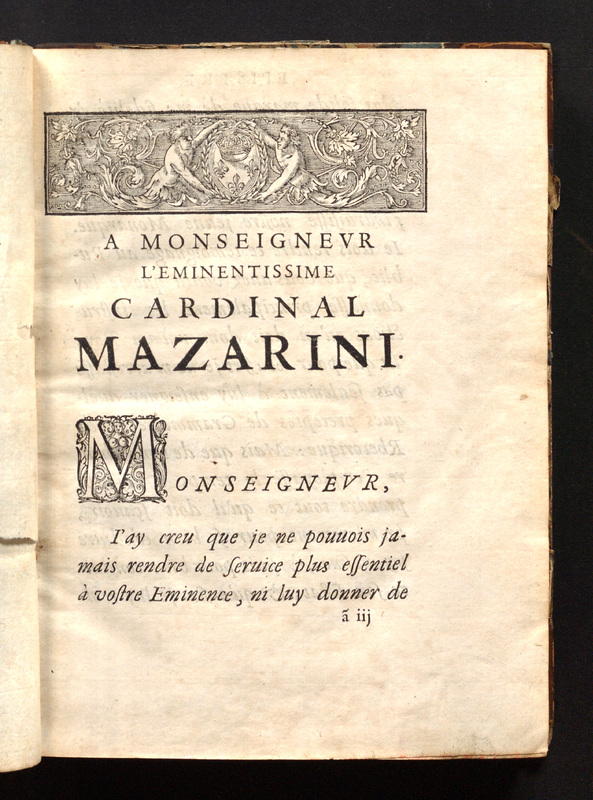 Margaret of Valois married Henri IV in 1572, and a week later, it was said that Catherine de’ Medici was involved in the St. Bartholomew’s Day Massacre, which resulted in the slaughter of thousands of Protestants who had travelled to Paris to see Henri IV’s wedding. Historians have credited Margaret with saving the lives of dozens of Protestants, including her new husband, during this time. However, Henri IV had to pretend he converted to Catholicism as another way to ensure his survival. For a few years after their marriage, the couple lived in Pau where they bickered constantly and rotated through a series of lovers. After staging a coup in 1582, Henri IV imprisoned her in a castle for eighteen years until they divorced. In 1599, seven years after divorce proceedings began, the marriage was annulled and Margaret kept her title as queen.

During this tumultuous time, Henri IV had several royal advisors at Court, one of whom was Cardinal du Perron (1556 – 1618). Originally a Protestant whose family fled briefly as a result of the St. Bartholomew Massacre, he converted to Catholicism and became a politician. Henri IV favoured Perron and in 1591, appointed him to become the bishop of Évreux. At the king’s request, Pope Clement VIII made Perron a cardinal in 1604. Perron worked in Rome where he would maintain the interests of Henri IV and try to sway things in his favour wherever possible.

At this time, Perron took a young and eager mentee under his wing named Armand Jean du Plessis who would go on to shape the French monarchy and absolutism in France when he became Cardinal Richelieu. Perron introduced Richelieu to Court, recognizing the youth’s promise in the political sphere as an influencer. Scholars have noted that Henri IV took an immediate interest in the young Richelieu, which laid the groundwork for the future cardinal to start establishing his fledgling career to work alongside the monarchy [2] . 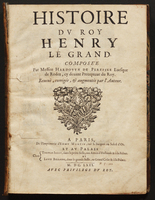 This book features an engraving of Henri IV of France and Navarre on the frontispiece, opposite the title page. Henri is shown wearing a Roman laurel over his head and dressed in military garb. The text is a biography of all of Henri's exploits, as well as his most famous or widely known speeches ("PAROLES MEMORABLES DV ROY HENRY LE GRAND"). Printed 52 years after his death in 1662, the book includes a dedication to the Chief Minister of France at the time, Cardinal Mazarin, who died in 1661, one year before the publication of this book. The writer, Hardouin de Péréfixe (full name Paul Philippe Hardouin de Beaumont de Péréfixe) was a clergyman who wrote French history books. Additionallt, at one point he served as archbishop of Paris.

According to one of the dedication sections, the printer (or author) mentions that they worked on this book for 6 or 7 years at the request of Cardinal Mazarin, so it may have been a commissioned publication. Hardouin de Péréfixe, who wrote the dedications, also makes mention of Cardinal Mazarin and possibly the other members of the royal council at the time feeling that it was important to give the King (in this case, Louis XIV), a more detailed sense of his own family history so that he could be a good ruler.

At one point in the dedication to the king, Hardouin de Péréfixe warns, "il y a des méprises,” (there are scornful or disdainful things said in this book) but also acknowledges that fifty historians worked on this book, which may explain the amount of time it took to publish it.

Some of the notable elements of the book are that it features a  "privilège du Roi," (permission of the King) which means the book received the king's authorization to publish the book for an amount of time between 5 to 10 years. In addition to the dedication to Cardinal Mazarin, the book also contains a dedication to the King (who at the time, would have been Louis XIV), as well as a dedication to the reader, all of which were necessary components of most books of the period.

In addition, there is a note at the bottom of the privilege that states that Hardouin de Péréfixe was Bishop of Rodez, also indicated on the title page, but it says that as Bishop, "Et ledit Seigneur Eueſsque de Rodez a cedé & tranſporté ſon droit du privilege cy-deſſus à THOMAS IOLLY, & LOVYS BILLAINE, Marchands Libraires à Paris pour ce qui concerne l’Hiꭍtoire de Henry le Grand, ſuivant l’Acte paſſé le 13. Janvier 1662" which means that Hardouin received the right to print this book in France because he had the authorization as a clergyman to grant it to the printer, Thomas Jolly and Louis Billaine according to an act passed on 13 January 1662.

[1] Henri’s mother, Jeanne d’Albret, was the Queen of Navarre in Spain. She raised her son as a Protestant.