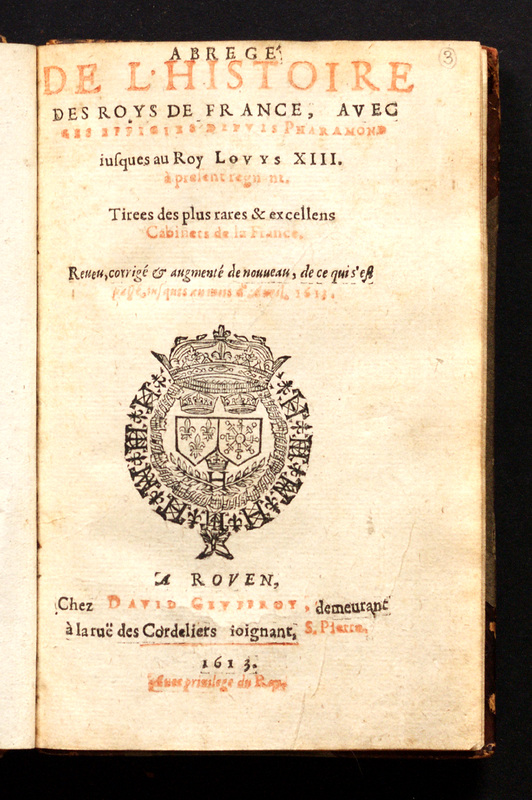 Louis XIII (1601 – 1643) was the firstborn son of King Henri IV of France and Navarre and his second wife, Marie de Médicis. He inherited the throne in 1610 at the age of eight after his father was assassinated. However, as he was not the age of majority, his mother, Marie, became the acting Regent of France. Louis XIII’s favourite royal advisor was Charles de Luynes [1], someone he looked to both as a surrogate father figure as well as someone with whom he could speak about such hobbies as hunting. At the age of 16, Louis XIII proclaimed himself King of France and Navarre. However, because of his youthfulness, many scholars, particularly G.R.R. Treasure, have noted the boy king was left out of political discussions and that he did not have much training for his royal responsibilities. There is evidence to suggest that he enjoyed playing chess and that he composed music, but, as Treasure asserts, “his greatest pleasures were physical ones, hunting, war, shoeing horses, making marzipan [2].”   He was also forced to content, for much of his life, with uprisings on the parts of his jealous male siblings, particularly Gaston D’Orléans and his half-brothers, Cesar and Alexandre [3].

After Charles de Luynes’s death in 1621 and with the Queen Mother still not yet recovered from the wounds of her exile, Louis XIII increasingly needed someone to provide him with advice to make competent decisions. He turned to the soon-to-be Cardinal Richelieu for this and together, they advanced the cause for absolutism in the French monarchy. Treasure affirms, however, that the inexperienced Louis XIII was more comfortable in the company of men like Luynes, St. Simon, or Cinq-Mars, “when he could relax with easy talk about horses and hawks.” Still, he did not have enough wits to win the respect of men like that. Treasure further suggests that men like Luynes entertained the young king out of deference to his royal position [4]. Further, scholars agree that Louis XIII was what modern speakers might refer to as a “drama queen” who suffered from hysterical depression (mauvaises humeurs) and thrived on creating emotionally charged situations.

In spite of the assortment of mistresses that the kings before him had kept, Louis XIII was sometimes nicknamed Louis the Chaste because he was never unfaithful to his wife [5]. He married Anne of Austria, daughter of Philip III of Spain, in 1615, in a bid to solidify a political alliance between France and Spain, two major Catholic powers in Europe at the time. As a Habsburg, Anne naturally disagreed with many of Cardinal Richelieu’s policies and opposed him whenever she could. However, she came under fire in 1635 when France declared war on Spain and she came under suspicion for writing letters to her brother that were considered to contain sensitive information that could compromise the French side. In August 1637, Richelieu forced Anne to sign agreements relating to her correspondence to make it open to inspection.

This book, printed in Rouen in 1613, is a short guide to all the kings of France from Pharamond to Louis XIII, and the book employs a woodcut of the boy king in his youth rather than depicting his mother, the Regent, which is of course a reflection of Salic Law in France. Although not in its original binding, the book is a significant historical document as a historical chronicle. Although David Geoffroy is listed as the book's printer, it is important to note that it came from the shop of S. Pierre.

Interestingly, although the book claims on the title page to have a privilège du Roi, I could not find any evidence of one, so there is a possibility that this book was bigger or longer in its original form. Another interesting feature is the handwritten marginalia that can be found on some of the pages.

[3] Cesar and Alexandre were two of the illegitimate sons Henri IV fathered with Gabrielle d'Estrées, Duchess of Beaufort, and his favourite mistresses before Catherine Henriette de Balzac d'Entragues. In 1626, Cesar participated in a plot against Cardinal Richelieu, but he was captured and held in prison until 1630.

[5] This loyalty and fidelity to his wife was considered so rare at the time that rumours spread about Louis XIII possibly being a homosexual. A century before, the same rumours had plagued his predecessor, Henri III, despite the fact that Henri had many love affairs with women.