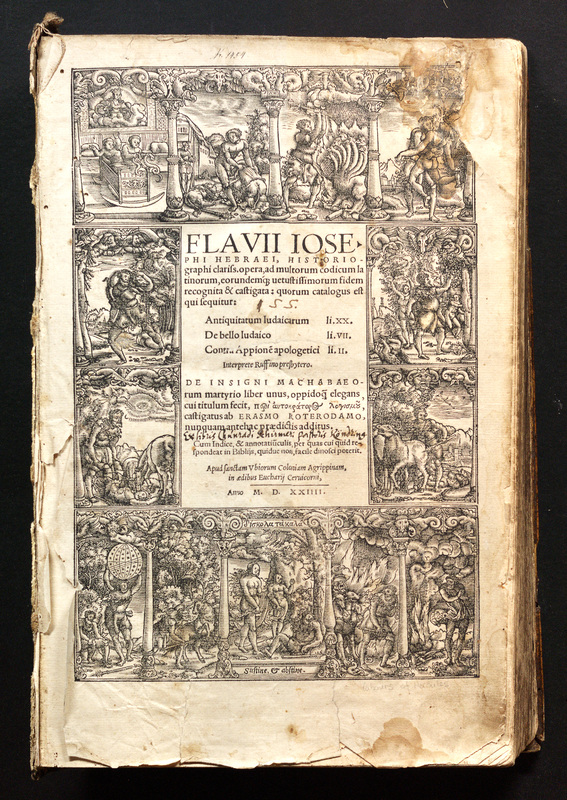 Flavius Josephus was born Yosef ben Matityahu in 37 CE into an aristocratic-priestly family in Jerusalem. Josephus received the highest education possible at his time, as befitting his status. At that time, Jerusalem and Judea more generally, were ruled, like the entire Mediterranean Basin, by the Roman Empire—at times directly by Roman governors, and at times נט Roman-appointed Jewish rulers (such as King Agrippa I, 41–44 CE). Josephus’ public career began when he took part in a delegation to Rome in 63/64, and when the Great Jewish Revolt against Rome broke out in 66 he was appointed commander of the rebels in Galilee. When the Galilean town of Yodfat was taken by the Romans in the summer of 67, Josephus surrendered, at which time—according to his own account—he was brought before the Roman general Vespasian and predicted that the latter would become emperor. At first a prisoner of the Romans, Josephus was eventually released when his “prophecy” was realized in 69. As Vespasian assumed his position in Rome, Josephus stayed alongside his son Titus, who remained in Judea to lead the campaign to victory. After the eventual crushing of the revolt and destruction of the famed Jerusalem Temple in 70, Josephus settled in Rome, and—under the auspices of the Flavian emperors—began his career as a historian. It is unknown when exactly Josephus died in Rome, but it was certainly after 93, and it is often assumed that he died around 100 CE (Thackeray 1929, 1–22; Bilde 1988, 27–60).

Josephus authored four works. The first, Jewish War (Latin: Bellum Judaicum), is a seven-book account of the Great Jewish Revolt against Rome. It begins with the historical background of the revolt, from the Maccabean Revolt (which began in 167 BCE), through the Hasmonean state (142–63 BCE), the Roman conquest (63 BCE), the reign of the famous Judean king Herod the Great (37–4 BCE) and the first century CE (books 1–2), but the bulk of it is an account of the Revolt of 66–70. It is thought that it was completed by Vespasian’s death in 79, or during Titus’s reign (79–81). Josephus’ second work, Jewish Antiquities (Latin: Antiquitates Judaicae), is a twenty-book account of Jewish history from Creation to the eve of the Great Revolt. It contains an account of the Laws of Moses (books 3–4), and includes a parallel, but not always identical, narrative to his history of the background of the Great Revolt in Jewish War (i.e., from the Maccabean Revolt to 66 CE). This work was completed in 93/4 (Ant. 20.267). His third work, a single-volume autobiography, Life (Vita), was appended to Antiquities (Ant. 20.266; Life 430). It is not, however, a true autobiography. Rather it is, for the most part, an account of several months of Josephus’s command in Galilee. Josephus’ fourth work, Against Apion (Latin: Contra Apionem), which was composed after Antiquities-Life, is not historiographical. It is an apologetic-polemical work aimed at justifying Judaism and the Jews against hostile views and narratives (see further Bilde 1988, 61–122).

Josephus composed all of his works in Greek, the lingua-franca of the eastern part of the Roman Empire, but they were later translated into Latin, and, in their later history, into various other languages as well. Although pro-Jewish apologetics was certainly one of Josephus’ main motivations in composing his works, they appear to have been generally ignored by Jews of Late Antiquity. His works were rather preserved by the Christian Church. Apparently, Christians found Josephus’ works worthy of preservation because he lived close to the time of Jesus and they provide the only comprehensive history of the Jewish people in the centuries preceding Jesus and in the time of Jesus and of his earliest followers. In addition, his description of the fall of Jerusalem was seen as corroborating the prophecy of Jesus as described in the New Testament, and he mentions John the Baptist (Ant. 18. 116–119) and James, brother of Jesus (Ant. 20.200), and even provides a very favorable testimony about Jesus, known as the “Testimonium Flavianum” (Ant. 18.63–64), which modern scholars reject as a later forgery or interpolation.

The humanist movement of the Renaissance with its interest in classical antiquity, the related Christian-Hebraist phenomenon, with its interest in Jewish materials (see esp. Dunkelgrün 2017), the religious wars in early modern Europe, and the printing revolution, brought about a renewed Christian interest in Josephus’ works. In fact, it appears that, in the early modern period, Josephus was “the most popular of the ancient historians” (Goodman and Weinberg 2016, 167; cf. Smith and Mayer 1999, 173–174). "Josephus, after Tacitus, was the ancient historian most frequently published in the vernacular in early Modern Europe" (Stein Kokin 2016, 205). Josephus' popularity lies behind the focus of much recent scholarship on his reception in the early modern period, as exemplified by a special issue of the International Journal of the Classical Tradition 23, 3 [October 2016]: https://link.springer.com/journal/12138/23/3. The importance and popularity of Josephus in the early modern period is reflected elsewhere in the CRRS collection, in two editions of the Bible (London 1521 and Lyons 1527), which contain printed references to Josephus’ works in the margins (see images below).

CRRS’s Renaissance editions of Josephus’ works range from 1524 to 1560, and are in a variety of European languages: Latin, French and Italian. This exhibit also includes a Latin edition of an adaptation (rather than simple translation) of Josephus’ Jewish War, known as Hegesippus (Latin, 1524).

Beyond describing the books themselves, this exhibit will focus on the handwritten notes made in these copies by their owners, in the margins (marginalia) or elsewhere. This will offer a glimpse of what interested early modern readers of Josephus’ works.

The books included in this exhibit are: 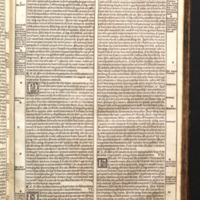 Similar cross-references to Josephus are found in the margins throughout this Bible. 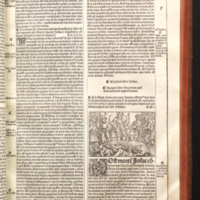 At the end of the book of Joshua, in the right hand margin of leaf LIII (recto): a reference to Josephus' eulogy, or exaltation, of Joshua in his retelling of Joshua's death in Antiquities 5.

Similar cross-references to Josephus are found in the margins throughout this Bible.

Bilde, Per. (1988). Flavius Josephus between Jerusalem and Rome: His life, his works, and their importance. Sheffield: Sheffield Academic Press.

Goodman, Martin and Weinberg, Joanna. (2016). “The reception of Josephus in the Early Modern period.” International Journal of the Classical Tradition 23 (no. 3) 167–171.

Goodman, Martin and Weinberg, Joanna (eds.). (2016). International Journal of the Classical Tradition 23 (no. 3), special issue: The reception of Josephus in the Early Modern period.

Smith, Pauline M.  and Mayer, C. A. (1999). “The reception and influence of Josephus’s Jewish War in the late French Renaissance with special reference to the Satyre Menippee.” Renaissance Studies 13 (no. 2) 173–191.

Curation of this exhibit was arranged by Dr. Nadav Sharon, Master of Information candidate at the University of Toronto where he studies Library and Information Science (2018–2020). The exhibit would not have been possible without the help of the staff of the CRRS. Especially noteworthy is the help of: Taylor Tryburski, a fellow Master of Information student who works at CRRS and who, among other things, undertook the digitization of books for this project; Dr. Natalie Oeltjen and Madeleine Sheahan who helped in deciphering handwritten French and Italian marginalia; and CRRS volunteer Ariana Sider, who holds a Master's of Medieval Studies degree from the University of Toronto and provided invaluable help in deciphering the handwritten Latin marginalia.