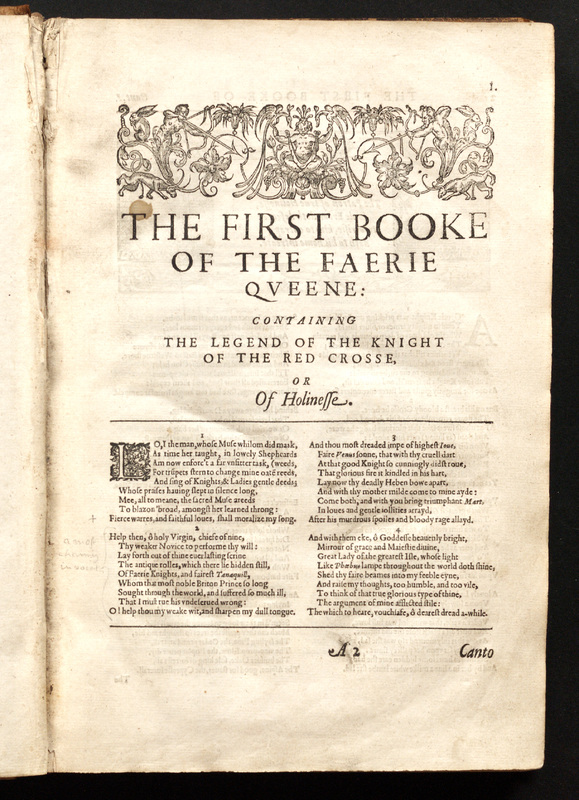 The Faerie Queen by Edmund Spenser (1611)

Edmund Spenser was born in East Smithfield, London, around the year 1552, although the exact date is unknown. He attended the Merchant Taylor’s School in London as a boy, and matriculated at Pembroke College, Cambridge. In 1590 Spenser’s work began going into print starting with the first part of The Faerie Queene (Books I-III), printed by William Ponsonby in London. Between 1591 – and 1595,Complaints, Daphnaida, Colin Clouts Come Home Again, Amoretti and Epithalamion all go into print as separate pieces. In 1596 the first part of The Faerie Queen is printed for the second time, and the second part (books 5-6) is printed for the first time. Additionally a second edition of Daphnaida goes into print as well as Four Hymnesand Prothalamion. On January 13th 1599 Spenser dies in London and is buried in Westminister Abbey.The first folio edition of The Faerie Queene is published posthumously in 1609 along with the Two Cantos of Mutabilitie by Humphrey Lownes for Matthew Lownes. In 1611 the first folio edition of Spenser’s Works is printed in London, also by H. L. for Matthew Lownes. This is the famous first folio edition of Spenser’s complete works seen above.

The title page is missing from this copy but the University of  Toronto Libraries catalogue takes its title from F.R. Johnson’s Critical Bibliography of the Works of Edmund Spenser and lists it as The Faerie Queen: The Shepheardes Calender: Together with the other Works of England’s Arch-Poët, Edm. Spenser: Collected into one Volume. The spine is simply titled: Spencer’s Works. The collection consists of:

An interesting feature of the book is that each of the sections were printed individually over a number of years and bound together at a later date. This can be seen in the CRRS’s copy with regards to Mother Hubberd’s Tale which was not printed until  1612. According to Johnson, the folio editions of the collected works were made up by issuing as a single volume a number of separate sections printed independently at periods often several years apart. Therefore even though the book and most of its pieces were printed in 1611, it wasn’t actually bound and sold until a later date. There are many practical reasons why the books were printed individually, but one of the more Interesting reasons has to do with Mother Hubberd’s Tale which was initially absent from the collection and added at a later date as mentioned above.  According to Hamilton “The first folio [consisted] of S.’s collected works, excluding Mother Hubberd’s Tale in order not to offend Burghley’s son, Robert Cecil, Lord Treasurer” whose public figure was satirized  in the allegorical poem as the character of the ape, while he himself was represented as a fox. Therefore it wasn’t until after his death in 1612 that Mother Hubberd’s Tale was printed and included in the collection, hence the 1612 date of publication found on the title page.

Johnson, Francis R. A critical bibliography of the works of Edmund Spenser printed before 1700. Baltimore : The Johns Hopkins press, 1933. Print

This article was prepared by Samantha Bellinger, Corbet Assistant at the CRRS from 2012-2014.