The Giunti Press: A Florentine Printing Family in the CRRS Collection 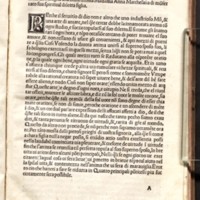 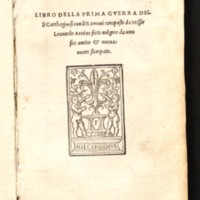 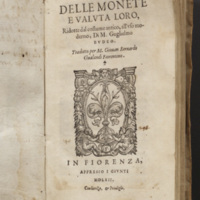 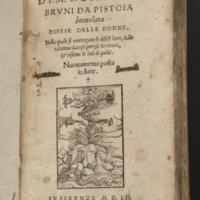 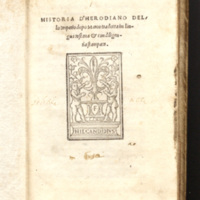 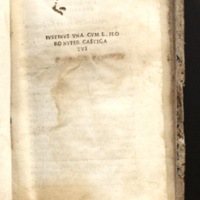 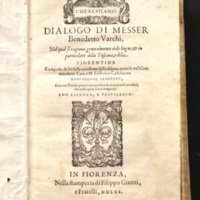 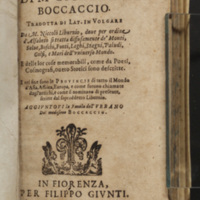 By the sixteenth century, Italian printing presses were far more successful than their northern European counterparts.[1] Their success had much to do with Italy’s established centres of industry and learning. In independent commercial cities like Venice, the printing presses were allowed to operate according to market demand and not the patronage networks that had previously controlled them.[2] Since the Venetians were not subject to the censure of courts or the demands of universities, their titles reflected the consumption patterns of the European book market.[3] Venice also had a ready supply of Greek and Latin editors, many of whom were refugees from the Ottoman Empire.[4] The links of some dynastic printing houses, like that of the Giunti, to the ruling families of many city-states cemented an international market for trade.[5] Furthermore, this form of international cooperation based on familial links allowed for the sharing of assets related to inheritance and financial support and for the safeguarding of the network from myriad risks associated with early modern trade.

Florence had its own natural advantages that allowed it to develop a strong printing industry concomitant with that of the Venetian trade. While Venetian printers focused on Greek and Latin texts, Florentine printers, owing to the city’s strong tradition in vernacular literature, were more accessible to wider audiences due to their printing in the vernacular.[6]At the beginning of the 16th century, patrons exerted significant influence over the titles published by the printing presses. As the century progressed, these patrons ​were superseded by wealthy editors who​ determined the content of the books, establishing wide networks of intellectuals who collaborated on these editions.[7]  These scholars introduced their own personal relations with local printers while Florentine merchants, owing to their particular international trade connections, promoted and distributed these books outside of Italy.

First appearing in the Catasto of 1427, the Giunti were a well-established family in Florence.[8] In 1437, the Giunti patriarch matriculated into the wool guild and became a small scale wool merchant in Florence.[9] The first indication of the Giunti’s involvement in the book trade was the establishment of a stationary business by Lucantonio, one of the younger Giunti brothers, in Venice.[10] In keeping with the Florentine tradition, this younger son had been sent to Venice to pursue trade. His partnership with his older brother Filippo in 1491 constitutes the the first recorded entrance of the Florentine Giunti into the world of printing.[11] Although Filippo was originally concerned with the stationary trade, Lucantonio soon convinced him to establish his own printing press. With a partnership that extended beyond printing, the Giunti of Florence were able to receive Venetian stock at a discounted rate while Lucantonio was able to easily enter the Florentine market. In Florence, Filippo was constrained in his printing by the already established genres of Lucantonio who specialized in medical, legal and liturgical texts with a wider market. Filippo’s first books were therefore two Greek humanist texts that received a wider audience in Florence than in Venice.[12] The profitability of the press caused the brothers to send their nephews to Rome to enter the ecclesiastical market.[13] Another branch of the Giunti was sent to Lyon to gain access into the large number of Florentine expatriates north of the Alps.[14] Additionally, the Giunti established themselves in Salamanca to promote their liturgical texts.[15]

By the time Duke Cosimo I came to power in 1537, the Giunti were well established in the major trading centres of Europe as quality printers with close relationships to business contacts and editors within the Italian intelligentsia and patriciate. Bernardo Giunti, the patriarch of the family at the time, asserted his republican sentiments by relocating to Venice in 1533 just as the Duchy was being established under Alessandro de’ Medici. He returned to Florence in 1537 where he continued to publish, albeit on a much reduced scale.[16] After the establishment of the Florentine Duchy, the Giunti press cultivated relations with Florentine patricians such as Piero Vettori, a known republican.[17] When Duke Cosimo I established his ducal press in 1547, he invited the publisher Torrentino to Florence instead of using the well-established Giunti, making Giunti an alternative press to the state-sanctioned publications.[18] The Giunti continued to operate  their international branches, ensuring the success of the firm through their wide production and distribution network. At the same time, the Giunti were quick to adapt to the changes in commercial and political regimes with the markets now under the control of the Duchy.

The ban on humanistic titles with the imposition of the Index of Forbidden Books in the latter half of the sixteenth century meant that the Giunti in Florence could not longer print the humanist and vernacular texts that they had focused on for their domestic market. [19]The Florentine Giunti complained that there was a lack of demand for their books since they were limited in what they could print as they could not duplicate the more popular titles that were printed by the other branches of the family, such as the Venetian press.[20] Thus by the 1570s, the Giunti of Florence were deeply indebted to the Lyonnaise and Venetian branches of the family.[21] The difficulties of printing and publishing in Florence not only affected the Giunti but also the Ducal Torrentino press, which ultimately failed after its short stay in Florence. [22]

The nationalistic nature of the sixteenth-century printing press manifested itself in the Giunti’s use of the printer’s mark of the Florentine Fleur-de-Lys in every city in which they printed their books. The idea of the nationalistic principle of printing where readers only wanted to buy from local printers was still very much a part of the early modern mentality.[23] Books printed in cities by local printers always included the name of the ruler in the current government. The Giunti books would include a colophon with the current head of government in Florence while the Torrentino books would often include the foreign heads as well. Florentines were deeply proud of the tradition of their language, often printing the works of Florentines in Tuscan dialect or Tuscanized the works of other Italian writers.[24] The Giunti employed local learned men and intellectuals to edit their vernacular texts.[25] The belief that only Florentines could successfully edit and print the Florentine tongue was a necessary component in the success of the Giunti and their vernacular titles. In Florence, about seventy per cent of the books were printed in the vernacular, a number that is disproportionately high compared to other printing presses in Europe at the time.[26] The Giunti’s position in Florence forced them to tap into its nationalistic and subtly republican nature, allowing them to become an integral part of Florentine society. The ability of the Giunti to adapt to the changing demands of the market, both at home and abroad is evidence of their ability to survive in the shifting atmosphere of printing in the sixteenth century.

List of Books Published by the Giunti Press in Florence in the CRRS Collection:

This article was prepared by Angela Zhang, Corbet Assistant at the CRRS from 2013-2015.

[1] William A. Pettas. The Giunti of Florence: a Renaissance printing and publishing family : a history of the Florentine firm and a catalogue of the editions. (San Francisco: B. M. Rosenthal, 1980), 5

[2] Malcolm Walsby. The book triumphant print in transition in the sixteenth and seventeenth centuries. (Leiden: Brill, 2011), 29

← William Shakespeare, "The Two Gentlemen of Verona" (1632)
The Giunti Press: A Florentine Printing Family in the CRRS Collection