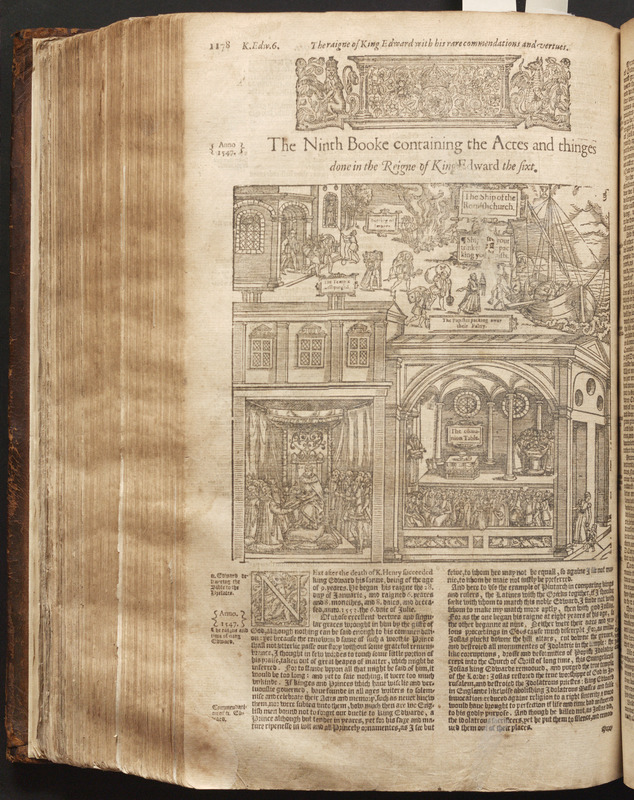 John Foxe’s Acts and Monuments, also known as the Book of Martyrs was one of the most popular and influential texts of Elizabethan England, often displayed next to the Bible (Kastan).

The book was produced while Foxe was an exile during the reign of Mary I (ruled 1553-1558). It was not published until the reign of Elizabeth (ruled 1558-1603), where it enjoyed multiple printings, including the Centre’s copy from 1596. The influences of his exile in Protestant Europe are made clear through how Foxe refers to Catholic rulers, including Mary, as tyrants, and describes the horrors of how Catholics treated Christians up until and including the English martyred during Mary’s reign. The detailed images included in the book examine Foxe’s feelings towards Catholic rulers, such as one where Henry VIII is portrayed stepping on Pope Clement VII.

The Acts and Monuments also examines earlier English and Christian history, including a a map of 5th century England or an image of Pope Alexander stepping on the neck of Frederick I Barbarossa from the 12th century.

The visual component of the text also includes ornate lettering as well as decorative signs at the bottom of blank pages.

The text contains detailed accounts of English Protestants being martyred for their beliefs. One account, accompanied with an image conveying the spectacle of becoming martyred, details an English trader in Portugal named William Gardiner. After stepping on the host during Mass, he was tortured in the attempt to make him recant, but he refused and is shown burning at the stake. His dismembered hands are lying at his feet.

Events such as these that were shared with a broad share of the English population served to bolster anti-Catholic sentiment and encourage the belief of Catholics as being associated with evil while English Protestants become martyred for the glory of God.

This article was prepared by Mitchell Gould, Corbet Assistant at the CRRS from 2015-2016.