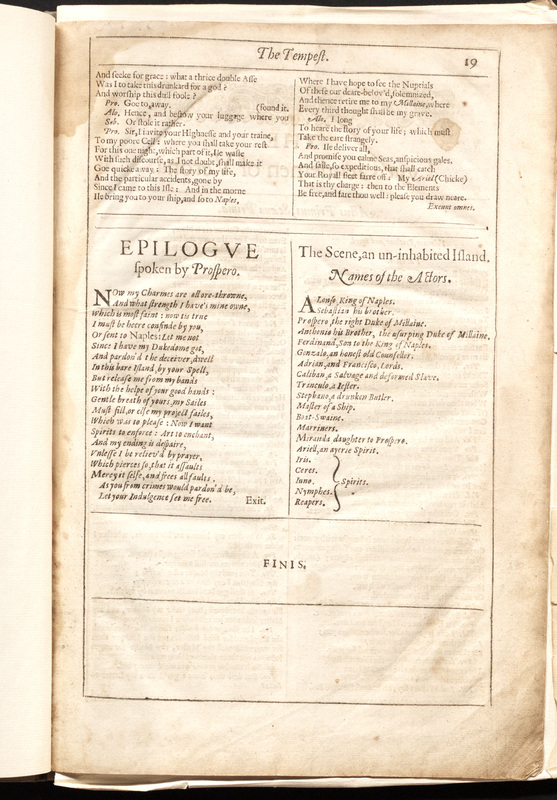 After his death in 1616, Shakespeare’s works were collected and published in a series of folios, an unconventional practice at the time.

The first folio, published as Mr. William Shakespeare’s Comedies, Histories and Tragedies, was made available in 1623 and proved so successful that publisher Thomas Cotes had a second folio produced in 1632.Shakespeare’s folios thus enjoyed incredible demand, making the partial destruction of a copy highly unusual.

Shakespeare’s The Two Gentlemen of Verona is often regarded as his weakest play. Believed to be his first play, his inability to utilize multiple characters on stage simultaneously is often accredited to his immaturity as a writer. Conversely, The Tempest is one of the most renowned works of English literature. Written towards the end of his career, the epilogue has been interpreted as Shakespeare’s farewell to the stage as Prospero seemingly asks the audience for a final applause. Therefore to remove Two Gentlemen from the folio at the cost of the closing lines of The Tempest demonstrates how one individual valued these plays relative to one another. This interaction with the text may speak to how Two Gentlemen enjoyed greater popularity than The Tempest at a previous period in history, or may simply demonstrate one individual’s personal preference.

The extraction of Two Gentlemen ultimately reminds us of the role of individual owners in the preservation of texts and how contemporary scholarship can stand in contrast to previous interpretations of the same literature.

This article was prepared by Heather McTaggart, Corbet Assistant at the CRRS from 2015-2016.

← Raphaell Holinshed, "Chronicles of England, Scotlande and Irelande" (1577)
The Giunti Press: A Florentine Printing Family in the CRRS Collection →
William Shakespeare, "The Two Gentlemen of Verona" (1632)