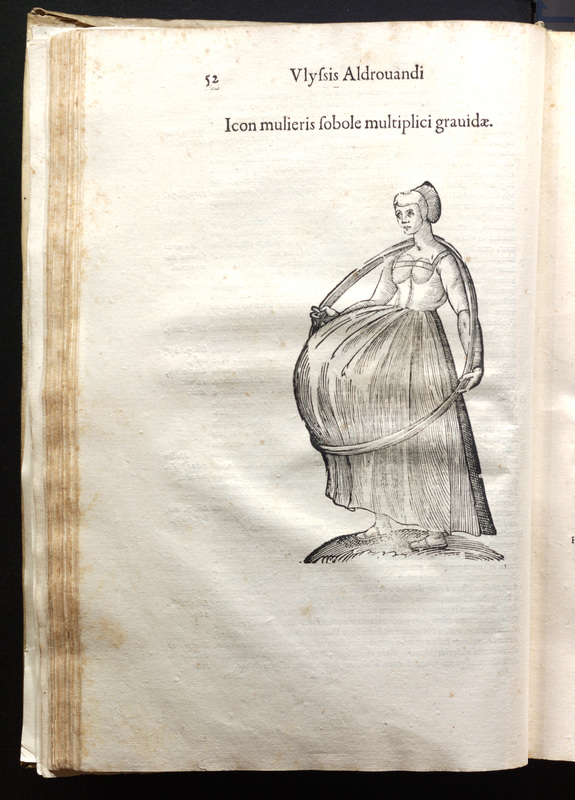 Woodcut of a Heavily Pregnant Woman in the History of Monsters (1658).

Ulisse Aldrovandi (1522-1605) was a leading naturalist of Italy’s scientific community and is best known for his many encyclopedic works, all of which reflect his interest in the collection and classification of nature. One of the most famous published works attributed to Aldrovandi is his History of Monsters, or in Latin, the Monstrorum Historia. Compiled from Aldrovandi’s extensive notes and published posthumously in 1642, the History of Monsters is a comprehensive account of numerous animal and human specimens, ranging from alleged fantastical creatures to real but perplexing human mutations and deformities.

The text’s treatment of human bodies is especially intriguing. Presenting common narratives explaining sexual reproduction, sections of the text explore female sex organs and the process of human gestation. However, early modern and medieval contemporaries had extremely limited opportunities to dissect female reproductive organs and instead relied on traditional authoritative sources. As a result, ambiguous and outright fictional depictions of pregnancy and the female body in texts like the History of Monsters were continually reproduced and widely accepted. 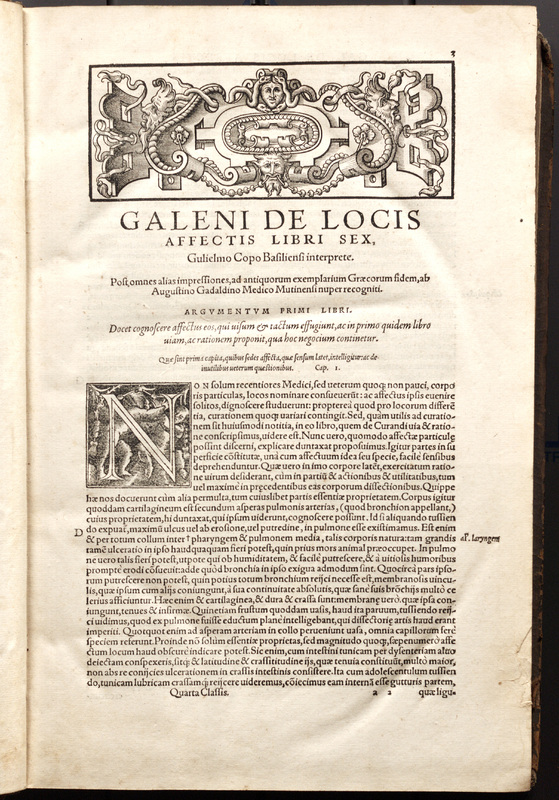 Classical Medicine and the Female Sex

Throughout antiquity and the Middle Ages, medicine remained predominantly based on the major works of Galen, with additions and amendments from Aristotelian thought. In such terms, males and females issued from the same form and had corresponding sexual organs that mirrored each other, one external and the other internal. According to this concept, called one-sex theory, high amounts of heat in utero would push the genitalia of males outward. Lacking this generative heat, women’s sexual organs remained internal as parallel versions of male genitals.

By the time of the early Renaissance, such medical theories had been widely disseminated and accepted as a result of print technology and the humanist demand for ancient works. Although access to classical philosophies had been possible through manuscripts, the advent of the printing press greatly increased the circulation of ancient texts and their readership. Natural historians were particularly interested in traditional authoritative authors, such as Pliny and Aristotle, and sought to accurately translate and reproduce their works.

The dependence of naturalists on access to classical philosophies and science produced a standard of Renaissance scholarship that was more concerned with the careful reproduction of ancient texts than with first-hand accounts or direct observation.

Like many other early modern works of natural history, Aldrovandi’s History of Monsters follows the pattern of privileging traditional sources. Heavily based on midwifery manuals, the sections of the text devoted to human reproduction are almost exact textual and visual reproductions of ancient and medieval works. 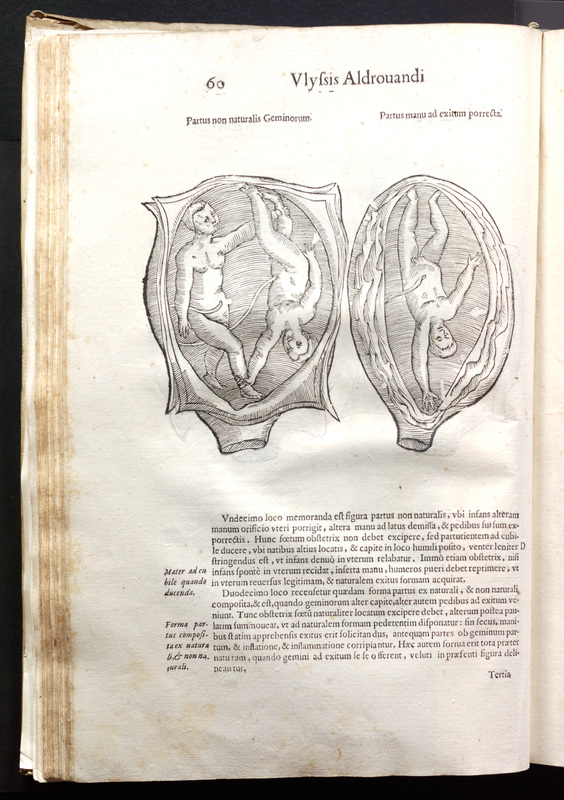 Woodcut of Twin Fetuses in the History of Monsters (1658).

Woodcut of Twin Fetuses in The Rose Garden (1513).

The tendency for naturalist to reuse and reproduce earlier sources is illustrated in a comparison of the History of Monsters with Eucharius Rosslin’s (1470-1526) influential midwifery manual, The Rose Garden for Pregnant Women and Midwives. Printed in 1513, The Rose Garden was highly influential and became a standard text in the canon of early modern midwifery literature. Predating Aldrovandi’s text by over a century, the many woodcuts featured in The Rose Garden for Pregnant Women and Midwifes are remarkably similar to the images displayed in the History of Monsters. The resemblance of these images speaks to the existence of a Renaissance intellectual culture that valued compiling and replicating earlier sources above generating new, scientifically sound scholarship. 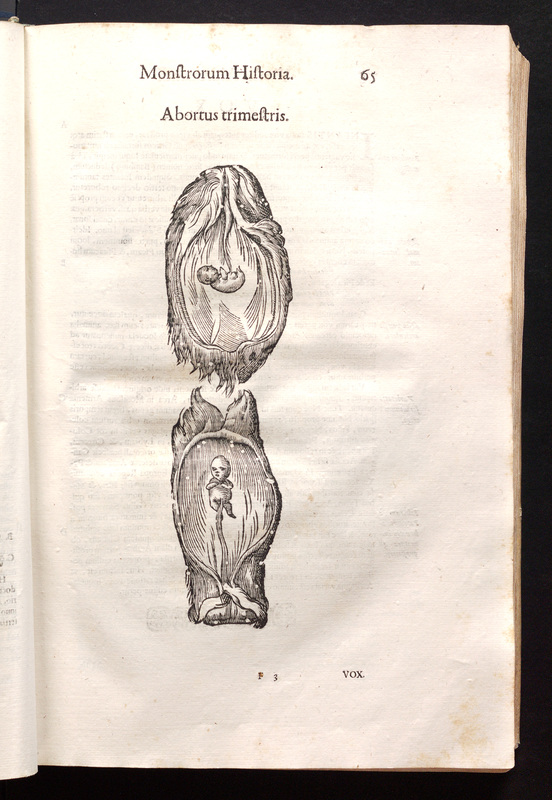 Woodcut of Fetuses in the History of Monsters (1658).

The Pregnant Body as Monstrous Many of the images of fetuses in the History of Monsters depict the uterus simplistically, drawing a basic balloon shape and sporadically including other details such as the cervix, vaginal or ovaries. When the ovaries, or female “testes”, are indeed depicted they are often erroneously placed near the base of the uterus. This purposeful positioning is a reiteration of one-sex theory, based on the understanding that because the testes are higher on male genitals, the reverse would be true of female sex organs.

Furthermore, within the History of Monsters there are multiple depictions of pregnancy and female sex organs, however, many of these images are paradoxical and represent distinctly different representations of the female body. 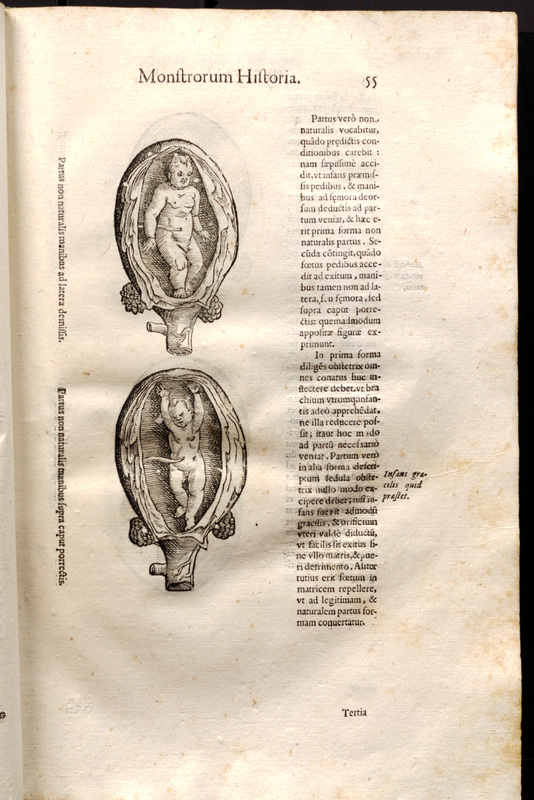 Woodcut of Fetuses in the History of Monsters (1658).

Some of these images are anatomically sophisticated while others depict only the most basic anatomical elements. The inconsistent and contradictory depictions of female sex organs reveal the confusion surrounding female genitalia as well as natural historians’ disinterest in producing an accurate and standardized medical account of the female body. Rather, the depiction of the female body as a curiosity demonstrates the desire of natural historians to curate a compelling and even shocking account of pregnancy.

Thus, the inclusion of a section devoted to female reproductive organs within the History of Monsters establishes the way humans specimens have been classified and more broadly how they have been valued by naturalists, particularly within a structure that emphasizes the unnatural and the deformed. Stressing the unknown elements of the female body within this context highlights the perceived understanding of women and their genitalia as grotesque and monstrous.

The historical marginalization of women’s bodies and the pervasive consideration of female sex organs as being hidden and secret undoubtedly contributed to these conceptions. Immortalized in print, ambiguous and imagined depictions of the female body were broadly circulated and accepted in the Renaissance. 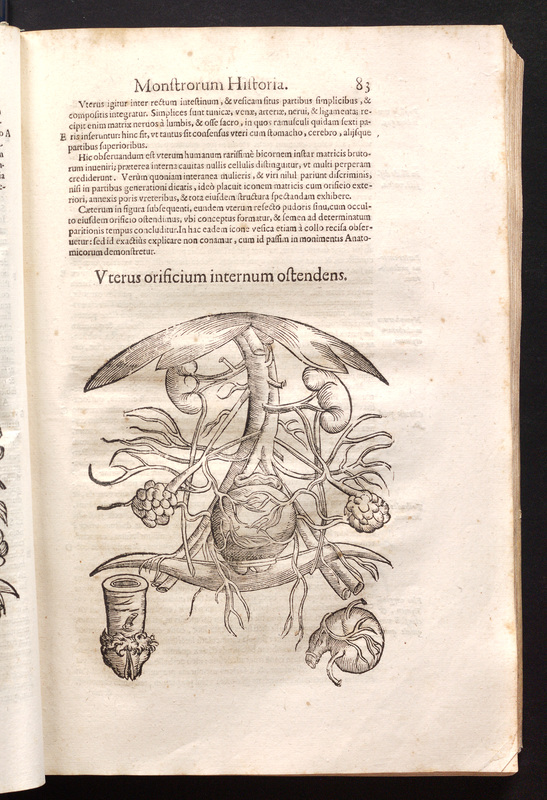 Woodcut of Female Sex Organs in the History of Monsters (1658).

← Imagining and Reproducing Martyrdom Through the Printed Image
Sidereus Nuncius: Galileo’s discoveries through the eye of the perspicillum. →
Aldrovandi's Monsters: Imagining the Pregnant Body