Sidereus Nuncius: Galileo’s discoveries through the eye of the perspicillum. 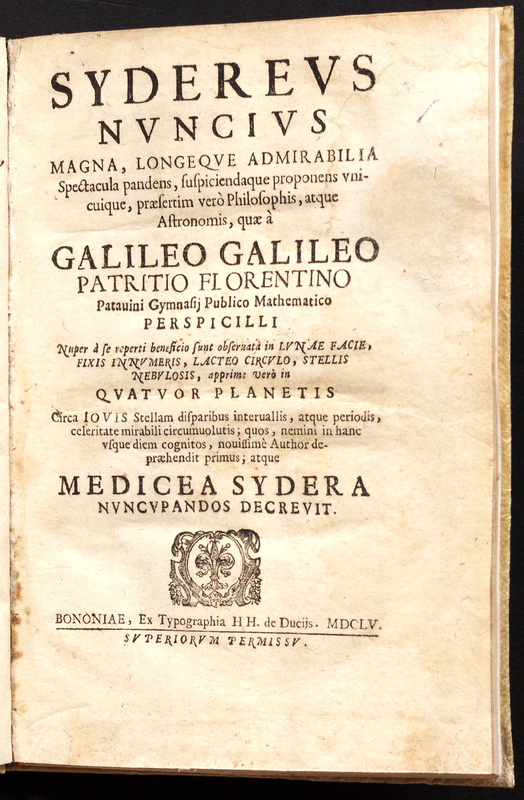 Sidereus Nuncius was the first ever published scientific book that dealt with astronomical discoveries made through the telescope. The first edition was printed in Venice in 1610 by the Thomam Baglionum printing house, using engraved metal plates for the images of the moon, and woodcuts for the remaining images. The edition presented in this exhibit was granted copyrights (Superiorum Permissu, in Latin) and printed in Bologna in 1655 by H.H. de Ducijs. It consists of Galileo’s report on his observations on the surface of the moon, on his findings of countless stars in the constellations and, more importantly, of his discovery of the four planets orbiting Jupiter. These discoveries sparked both interest and concern among the lay and clerical population of Europe and, through the means of the printing press and the collective input of European philosophers and scientists, marked the beginning of the History of Modern Science. 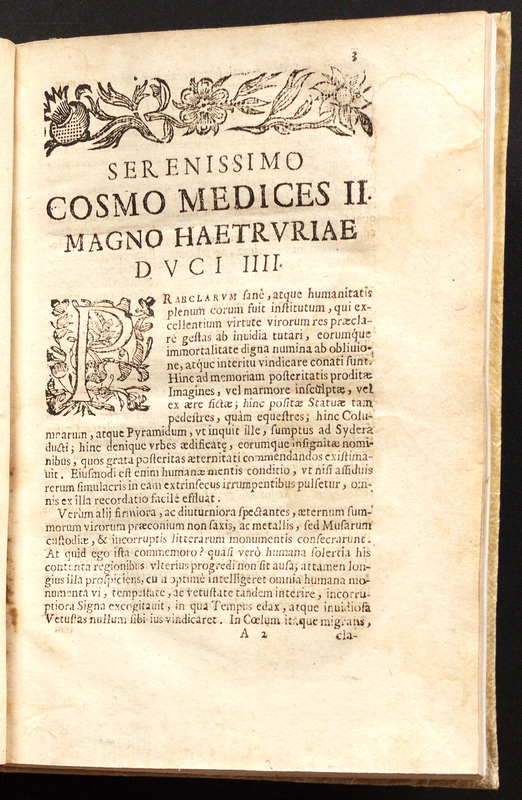 The Sky is the Limit.

A three-powered telescope (perspicillum), invented in the Netherlands in 1608, was improved by Galileo in 1609. By grinding and re-arranging numerous lenses he built his own twenty-powered instrument which could magnify objects up to 1000 times larger and 30 times closer than when viewed with the naked eye. The book begins with a dedication to Cosimo de’ Medici, who became Galileo’s patron in September 1610. It continues with Galileo’s description of the construction of the telescope, accompanied by a drawing that illustrates its functionality. Galileo detailed his observations of the surface of the moon, stating that it was not at all smooth as previously believed, but, like our Earth, had craters and mountains. Galileo was able to measure the height of those mountains by means of various calculations based on the shadows cast by the light reflected from the Earth. 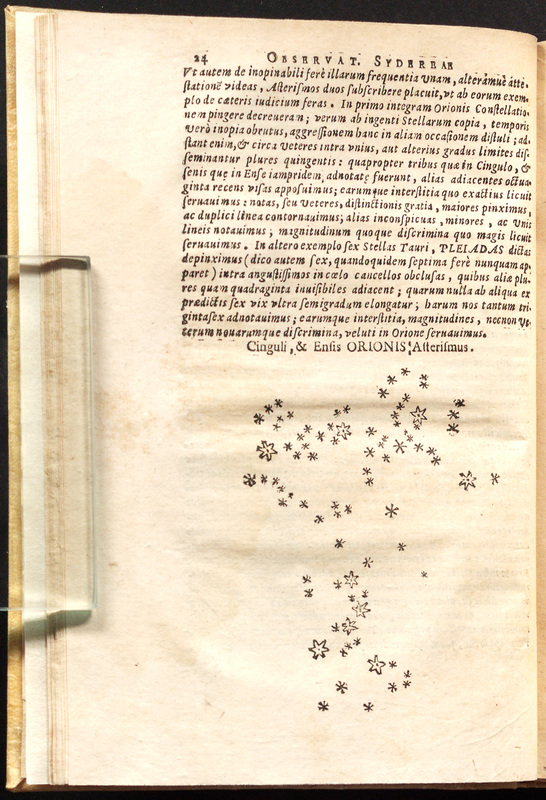 He also discovered hundreds of new stars in the Orion’s Belt and more than 40 new ones in the Constellation of the Pleiades. When exploring nebulas and the Milky Way, he found that they were composed by innumerable clusters of little stars. Most importantly, he discovered four stars orbiting Jupiter. From January 7 to March 2, 1610, Galileo meticulously noted his observations on four stars circling Jupiter, and compared these movements to a fixed star in their proximity. He concluded that the four stars were, in fact, orbiting the planet, and that altogether were revolving around the Sun in a 12-year period. He made reference to the Copernican system and how it could now be irrefutably proved that since the four stars and Jupiter circled the Sun together, and the Moon orbited the Earth, it was logical to assume that the Earth and the Moon together also orbited the Sun. His findings challenged contemporary dogma and helped to increase the controversy between the Ptolemaic geocentric system and the Copernican heliocentric theory. 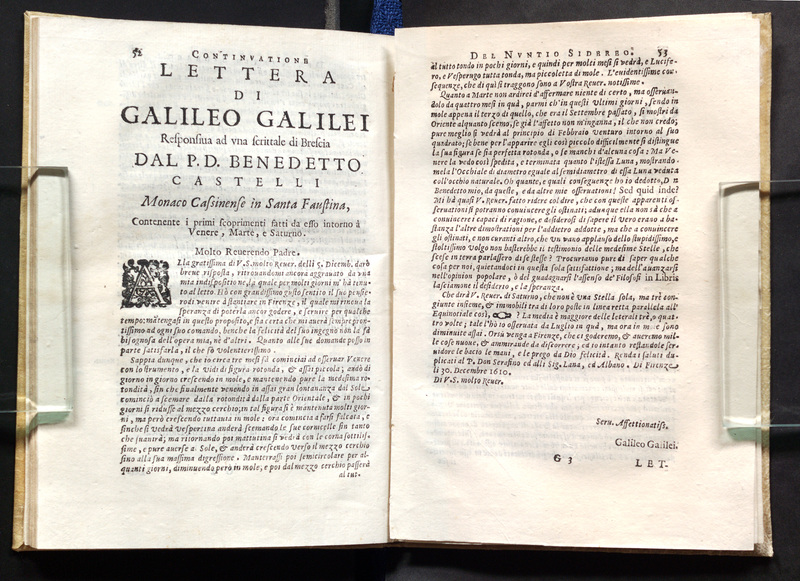 The Republic of Letters.

A close-knit community of philosophers and mathematicians scattered throughout Europe was engaged in scholarly correspondence. These intellectuals collaborated, mainly in Latin and often under pseudonyms, in the exchange and distribution of information and ideas within the continent.1

The Republic of Letters was officially legitimized in England in 1662 with the foundation of the Royal Society. This edition of Sidereus Nuncius includes four hitherto unpublished pieces of correspondence between Galileo and some of his humanist supporters: 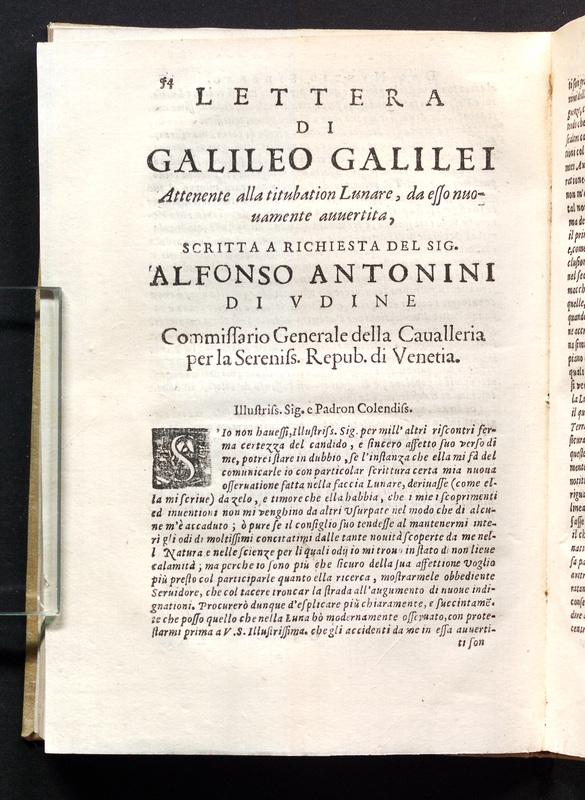 The third and fourth letters are the correspondence between Galileo and Alfonso Antonini, founder of the Academia degli Sventati in Udine, written while Galileo was already under house arrest in Arcetri. It is interesting to note the printer’s error on the date of Galileo’s letter, which reads February 20, 1637, instead of 1638. This letter pertained to Galileo’s studies on the titubation of the Moon. It also referred to a Bavarian Jesuit mathematician, named Schneider, who claimed to have observed sunspots prior Galileo, and to have published his findings in the book Three Letters on Solar Spots under the pseudonym Apelles, to avoid conflict with the Church. This could be seen as one of the first cases of a breach in copyright, and it would be interesting to know how such cases were dealt with at that time. Antonini’s reply, reiterating his support to the philosopher, was written on March 3, 1638. 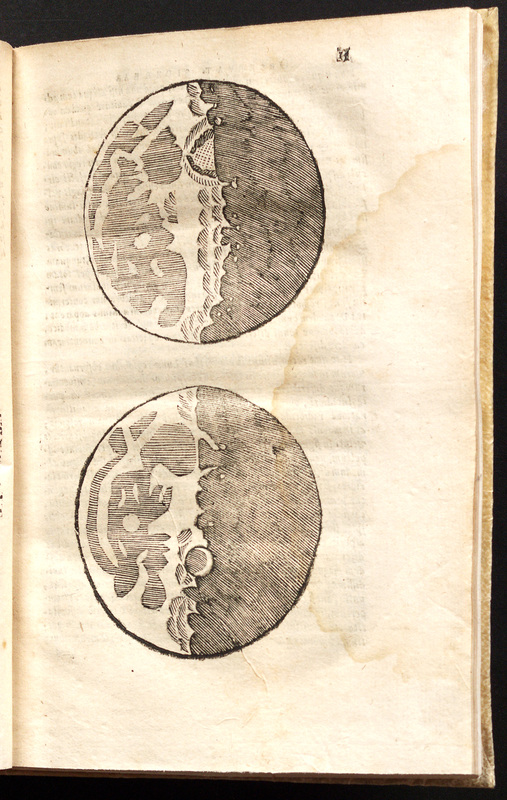 The book was received with great interest by intellectuals, and the initial 550 copies sold within days of its publication. Simultaneously, Galileo came under attack by religious and secular opponents; he was summoned to Rome in 1616 and warned not to support heliocentrism. At the same time, Copernicus’ De Revolutionibus Orbium Coelestium entered the Index of Prohibited Books, and all printers across Europe were warned not to print any material written by Galileo. However, festinando lente, he continued his observations and gathered all of his findings in his Dialogue, publishing it in 1632. His manifestly strong support for the heliocentric system eventually resulted in his being summoned again by the Inquisition in 1633. Galileo was forced to recant and was condemned to house arrest. Legend says that while leaving the trial, Galileo whispered “Eppur si muove” : and yet it moves.

Without a doubt, the printing press was instrumental on Galileo’s rise to fame. Printers such as Elsevier in the Netherlands went through clandestine channels in order to meet with the philosopher in Arcetri, and took great risks in publishing his books, thereby spreading this new knowledge to the world.3 Although his books were initially understood by but a limited circle of mathematicians and scientists, the idea they contained revolutionized the way we study and understand the universe and inspired mankind to engage in the exploration of the solar system both through manned spacecraft and through the sending of robotic probes.