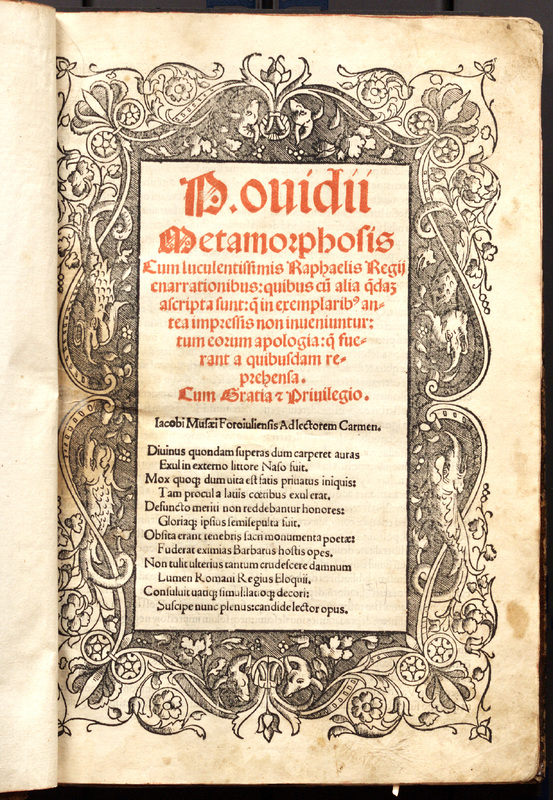 Title page of the 1517 edition of The Metamorphoses.

This CRRS rare book is a 1517 Venetian edition of the Metamorphoses, originally penned by Ovid in Rome during 8 AD. The book is complete with over fifty woodcuts with scenes of both Christian and pagan stories, and accompanied by two different indexes that indicate which poems and important figures are on what page and where to find the woodcuts throughout the book, all while being written in Latin. While this is an original Roman text, the printer Georgius de Rusconibus’ additions of Christian elements expresses the idea of creation and creates a parallel of the old and new world.

Georgius de Rusconibus and Raffaele Regio were two Venetian printers who worked on a revamped edition of Latin poet Ovid’s Metamorphoses, in 1517. Their edition of this text, which originally detailed the creation of the world from Roman perspectives, stayed true to the literal meaning behind the word metamorphosis: the transition from one thing to another. The original text was encompassed with symbols that pertained to classical history, yet Rusconibus’ edition is filled with images and symbols that are also significant to Christian history and how it transitioned from pagan culture. On the page that the creation poem begins, Rusiconbus placed a woodcut of Jesus Christ above the actual text, possibly referencing to the original idea of constant change, creating a parallel between the theology of old and new. There is no clear reasoning behind the placements of the fifty-nine woodcuts that hold significant meaning to Christianity and Paganism, yet an important question still lingers: how well do these images connect to the text on the page, if there are any connections at all? 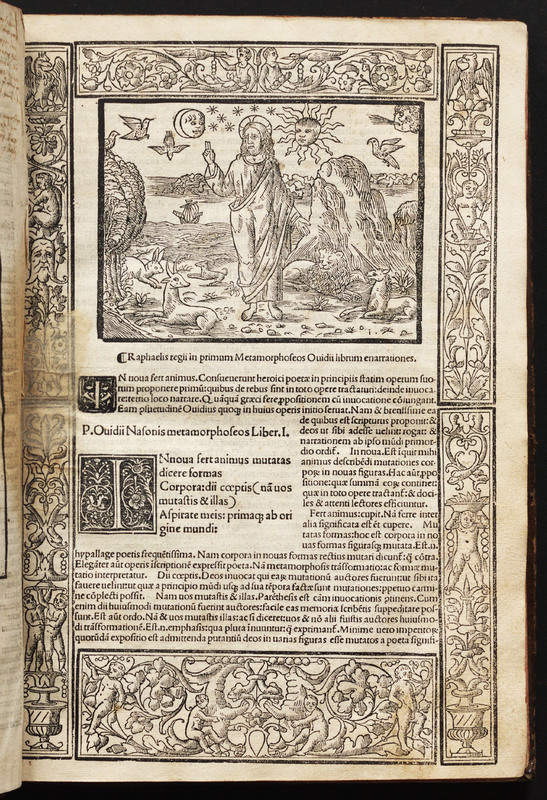 Woodcut of Jesus Christ on the opening page of the poems.

16th century Florence and Venice saw a massive increase in the rebirth of classical writings, thanks to the printing press. The two cities were incredibly rich with knowledge, paying close attention to subjects such as rhetoric, history and art, which might have stemmed from their ancient roots.  After the fall of the Roman Empire in 476 CE, many important scholarly works seemed lost to the world due to the barbaric invasions, with the barbarians taking anything that seemed valuable. Fortunately, some of these texts had survived when parts of Rome had not. Because these texts were regarded as a part of Rome’s sacred history, they were preserved and read annually, some even being copied by hand1.  This tradition first started in the middle ages and carried through to the Renaissance, where humanist scholars incorporated these texts into the classroom. The dominant religion in the newly formed European state was Christianity, yet Latin texts were regarded highly due to many reader’s fascination with the world painted through the words of the author, particularly Italian humanists. As Christianity began to grow and classical texts began to spread, humanist’s began to see themselves as true descendants of Rome, slowly beginning to compare the old texts of Rome to the new days of the Italian world. 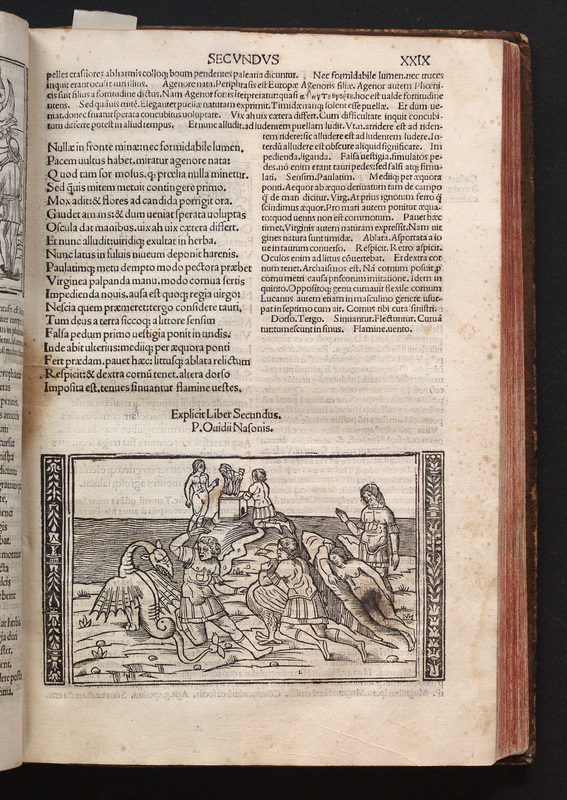 A woodcut that aligns with pagan mythology, partially rubbed out.

Authors such as Cicero, Virgil, Seneca, Horace, and Ovid were read continuously by Christian scholars who were enamoured with how eloquently Latin scholars wrote2. Ovid’s style of writing, for example was deemed flexible to fit a wide range of genres such as rhetoric, epic, and prose narrative3. Since those were areas of interest for humanist in both Florence and Venice, the Metamorphoses was praised for being a well loved text4, creating a demand for more copies. Once those copies found there way outside of the classroom, it began to inspire young humanists to reevaluate their morals and life lessons that Ovid tried to convey, all while maintaining close ties to their Christian roots. While there was not any clear desire to return to paganism, many humanists expressed their fondness for how captivating the Metamorphoses was, drawing on the idea that it expressed a beautiful change within the world that lead to the rise of the Christian religion which was at the foundation of almost every humanist. 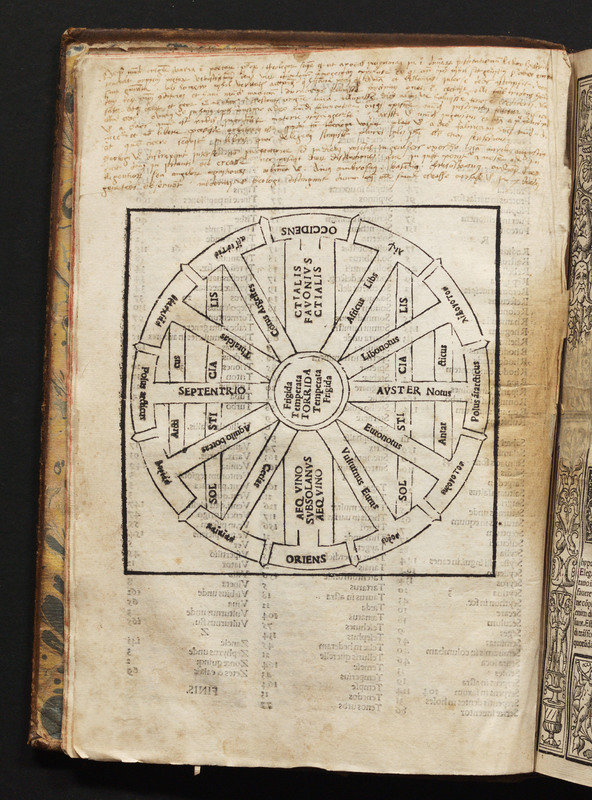 A map detailing various locations and temperatures from the Roman Empire

Ovid was not always regarded so highly: he was banished from Rome sometime during the publication of the Metamorphoses in 8 AD, even trying to burn the manuscript since he assumed people had read enough of it. Seneca the Elder also did not have a good impression of Ovid, criticizing Ovid’s approach on poetry for not writing in a cohesive manner that many other poets had done for generations5. When Rome saw the end of its days, Ovid became a name lost in the wind until his compendium of poems were found once again. Christian scholars became intrigued by Ovid’s unique writing style and saw deeper meanings behind his poetry, unlike Ovid’s contemporaries who ridiculed him. In Rusconibus’ and Regio’s commented edition of the Metamorphoses, there is no given explanation as to why they chose to include Christian woodcuts. However, a possibility as to why they would include them is because this is their idea of expressing how Christianity came to be, similar to how Ovid explained the creation of the world through pagan culture. In short, this could be a parallel between a creation myth and the actual rise of Christianity. 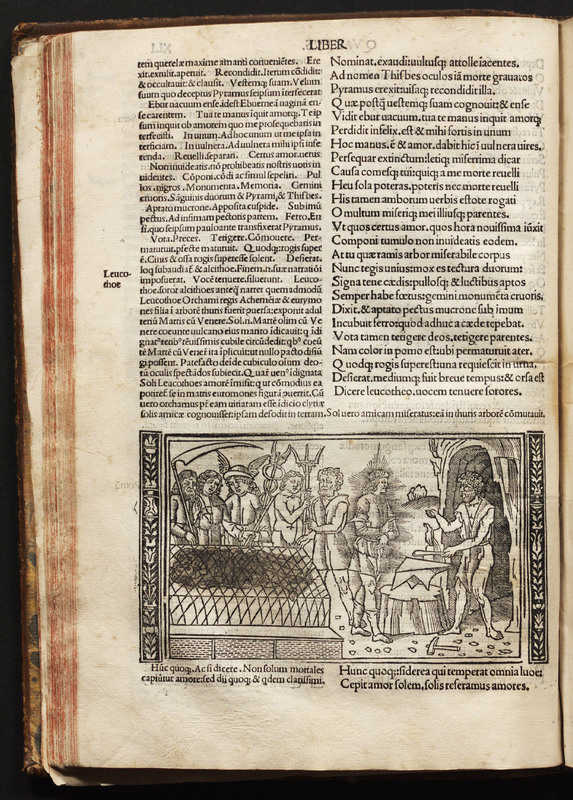 A woodcut that features the 12 Olympians from pagan mythology, partially rubbed out.

Humanism explores many topics, religion being no exception to that. Seeing Christian woodcuts in a pagan text might not have astounded many Italian humanists, as they understood the deep meaning behind Ovid’s idea on constant change. The Metamorphoses was a text that expressed how naturally change can occur, including religion. Whether or not Rusconibus and Regio intended to support Ovid’s theory on transformations, the woodcuts add a visual experience that showcases important moments in Christian culture on a text that emphasises the importance of the Roman legacy.