"It is much safer to be feared than loved"
-      Niccolo Machiavelli, The Prince 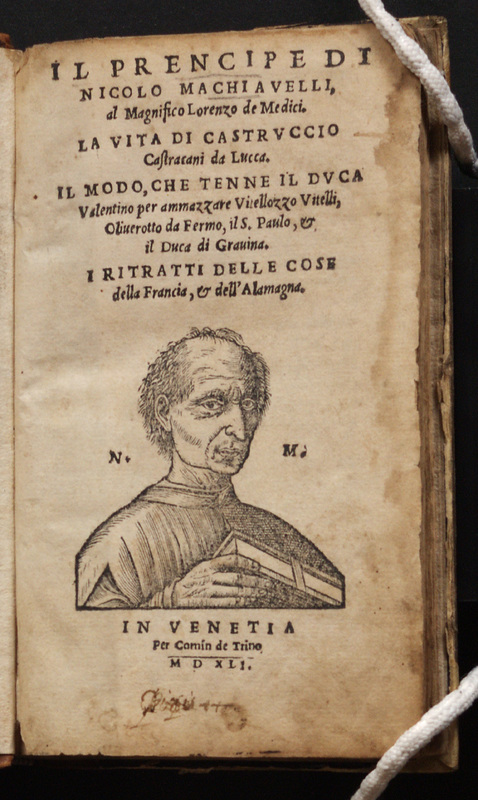 Title page of The Prince

Niccolo Machiavelli wrote the Prince while he was under dire circumstances, The forty-four-year-old diplomate had just spent fourteen years ( from 1498 to 1512) living a life of luxury and holding significant influence and power in Florence while it was a republic. In 1512 Florence underwent a regime change, as the Medici family came back into power. The Medici accused Machiavelli of conspiring against the new regime, thus against the Medici Family, and he was thrown into jail to then be sentenced to a life of exiled in San Casciano (South of Florence) with his wife, Marietta Corsini, and his family. It was during his long exile "wandering the fields" of Casciano that he started to write the Prince. Disguised as a present for Lorenzo De Medici, the Prince and its subject matter quickly turned Machiavelli into Italy’s notorious villain with its controversial topics and advice. Print culture and the printing press allowed for Machiavelli’s controversial ideas to be spread and shared throughout all of Europe, and ultimately the entire world. The CRRS edition The Prince was published in 1541, ten years after Machiavelli’s death. Thus it was not a first edition of the book ( the first published book dates to 1532). 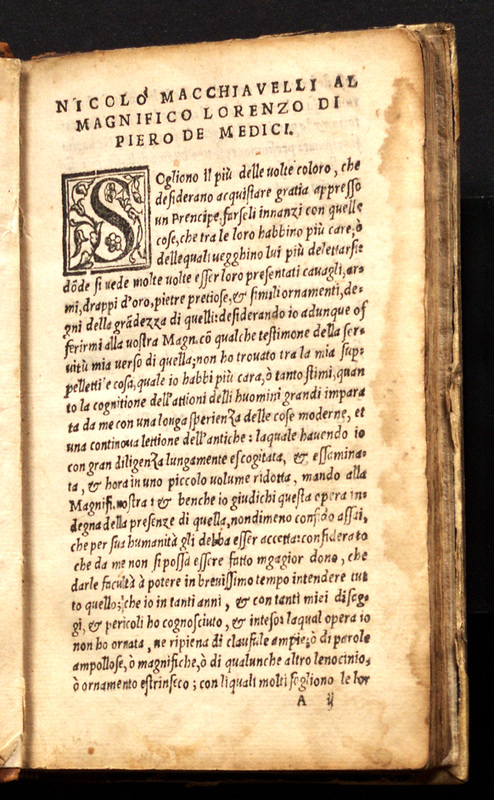 In the first pages of The Prince, there is Machiavelli’s dedication to Lorenzo de Medici ( il Magnifico). Martin Davies argues that books were often vehicles of an alliance between culture and power in the form of translations, or dedications of original works commissioned or unsolicited. The function of dedications in popular books, should not be taken as an innocent sign of amiability or fondness instead it was a tactic for writers to gain political, social and financial support powerful and rich patrons. Looking at the dedication Machiavelli writes:

And though this gift is no doubt unworthy of you, I feel sure the experience it contains will make it welcome…  for highness please take this small gift … then if from the high peak of your position, you ever look down on those far below, you will see how very ungenerously and unfairly life continues to treat me.  [1]

A master politician and manipulator, Machiavelli appeal and compliments Lorenzo while simultaneously trying to garner sympathy for himself. He doesn't fail to let Lorenzo know that his life is very ungenerously and unfair. If The prince was published in Machiavelli's time, the way that he wanted, would the dedication letter be included in the final copy? The purpose of the dedication letter was to glorify the patron and their family and show the authors alliance with this patron and his family, and as a result, the work would not only be published, but published using high-quality material. The publication of ones writing might result in the author's immortality as his thoughts and ideas are written would survive long after the authors time.  Today anyone who thinks about Niccolo Machiavelli, associated him to  The Prince. The Prince is Machiavelli’s legacy; it is what makes him famous in the 21st century,  487 years after it was published.

The dedication also reveals Machiavelli’s intended audience. He tells Lorenzo that “thought this gift is no doubt unworthy of you … I haven’t prettified the book or padded it out with long sentences or pompous, pretentious words, or any of the unnecessary flourishes and attractions, so many writers use”.[2]Machiavelli sees The Prince as a realistic “how to” guide for men going into, and in politics and as well as young lords and rulers. The consumers of this book would be wealthy men or men part of the upwardly mobile, meaning those who are moving to a higher social class; acquiring wealth and status. Machiavelli's audience reflects his own low-class to high-class ascent.

The Treatise, The Courtesy book

The Prince is one example of the many courtesy books and treatises that flourished and gained massive popularity during the Renaissance. These were books that attempt to codify manners, styles, ideas and values of society.[1]With humanism promoting the importance of education, living an active life [ being not only immersed in society but also contributing to society] and the invention of the printing press, there was an improvement in the average Florentines education and literacy.  The printing press and the development of the book trade allowed for people to get their hands of these  materials as it “created and fostered a sense of close communication and solidarity among those with similar interests and tastes.”[2]

This genre of book was very appealing to humanists and young men who are part of the upwardly mobile, who follow and studied this book religiously.

A feature of this book is the table of contents [ pictured to the right]  which allows the reader to glance through the content of the book and to find the section that he needs quickly.  The contents of the book range from advice on :  “how to govern cities and states that were previously government” [ chapter 4];  to whether is it better to be feared or loved” [ chapter 17]; to  “the role of luck in human affairs and how to defend against it” [ chapter 25]. [3]

The universality of this book can be used for someone who either runs a small town or even household to someone who rules over an entire country and empire. This particular book, printed in 1541, was not the first publication of The Prince, so it was likely a reprint having been sought after and in demand. The size and portability of the book and the common vernacular that it is written in ( Italian )  meant that it was accessible and understandable to the young Italian student. However, this particular copy has no marginalia and is in excellent shape meaning that it was not heavily used, perhaps being a second copy meant only for one’s collection.

The Prince can be credited for Machievelli's popularity and influence after his death. His controversial ideas and views were more accepted after his death as the Prince, and other books dealing with taboo and controversial topics became more popular.  His writing greatly influenced the Enlightenment and modern politics, and it is evident that print culture and its power that spread Machiavelli's words, both immortalized him and made him into a historical celebrity.

Davies, Martin. Humanism in script and print in the fifteenth century. The Cambridge Companion to Renaissance Humanism. New York: 2004.