Imagining and Reproducing Martyrdom Through the Printed Image 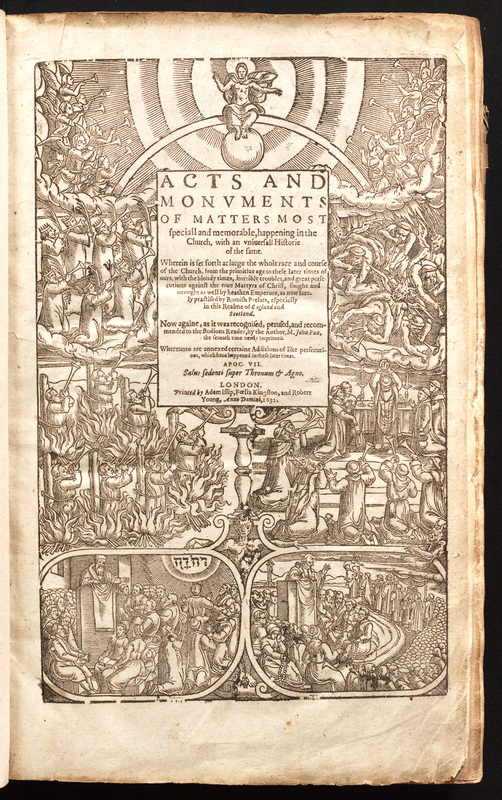 Frontispiece to the 1631 edition of Acts and Monuments

This book in the CRRS collection is the 5th edition of John Foxe’s Acts and Monuments (or the Book of Martyrs) published in 1596 in London by Peter Short shortly after the author’s death. The two volumes, focusing primarily on England and Scotland, contain Foxe’s Protestant martyrology and an extensive history of the Christian church from the time of the ancients to the Elizabethan era. No English book before it had been as long or as richly illustrated. It was often chained alongside the Bible and the Book of Common Prayer for reading by the public in cathedrals, churches, schools, libraries, guildhalls, and inns.[i] 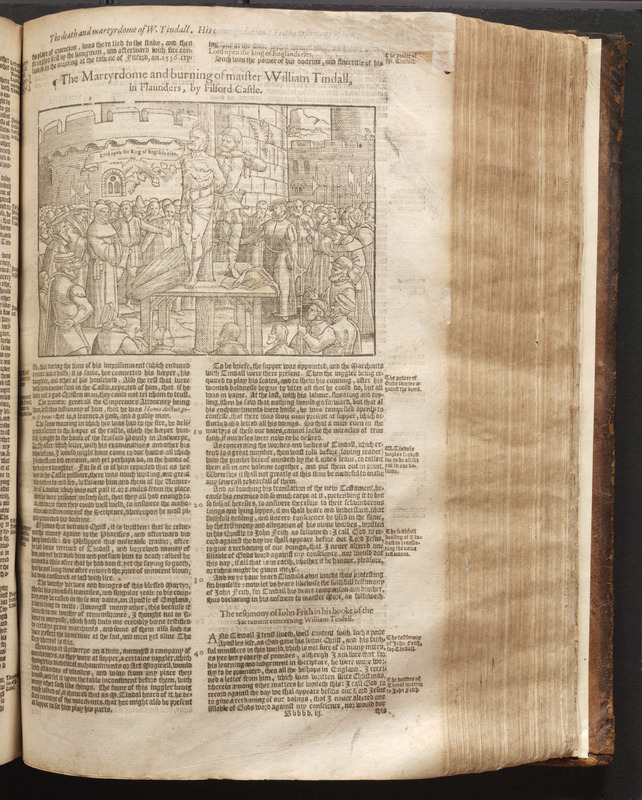 These harrowing accounts of the suffering of martyrs at the hands of the papacy, particularly during the Queen Mary I’s reign, shaped popular opinion about Roman Catholicism for centuries to come. Figures condemned as heretics by the Roman Catholic church were transformed into heroes in Foxe’s history. The hundreds of narrative woodcut illustrations, with their interplay of image and text, allow us to imagine how scenes of martyrdom played out visually, audibly and tangibly. These immersive sensory experiences were designed to emphasize the pain Protestant martyrs suffered and encourage readers to condemn their tormentors. 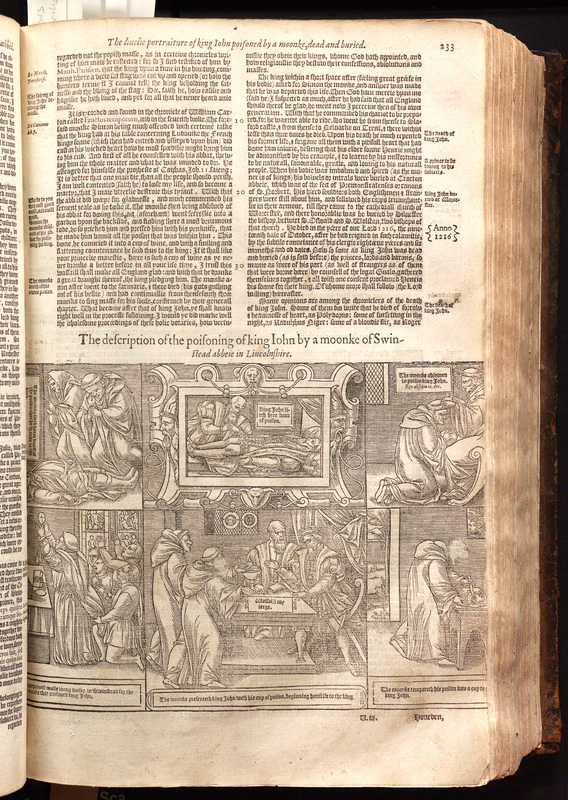 Actes and Monuments, with its inclusion hundreds of woodcuts, was a vast expenditure. The design of the woodcut illustrations is commonly attributed to John Foxe and his original publisher John Day.[ii] Straying from the common practice of circulating woodcuts among other print shops, Day preserved his for personal use.[iii] Beyond the expense of commissioning a skilled craftsman to create the woodcut, the process of integrating such an extensive use of illustrations into an already technically demanding work was complex. The specificity of these commissioned woodcuts also prevented their re-use in other print shops— making the decision to include lavish illustrations an economic burden for the printer.[iv]

⁕ How did these images work? What was the message Foxe and Day hoped to so carefully construct? ⁕ 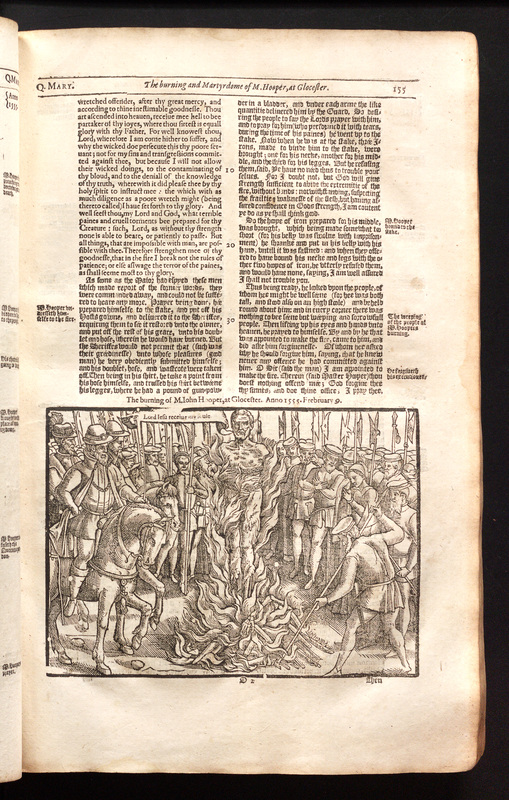 One of the most memorably gruesome narrative woodcuts depicted Bishop John Hooper who was executed for heresy in Gloucester during Mary’s reign. In Foxe’s account, windy conditions and a poorly constructed pyre led to his prolonged suffering at the stake, as the fire burned the bottom half of his body and not the top. Foxe describes the sights, sounds and smells and tells of “the fat, water and bloud” which “dropped out at his fingers ends”. Even without textual accompaniment, the image is strikingly sensorial. The flesh of his calves has melted away, leaving his bones exposed. The attention afforded to depicting this detail shows that the goal of the illustrations was to elicit visceral responses and prompt readers to imagine these sensations. The use of the speech scroll (or banderole) integrates an oral experience into the scene as Hooper exclaims “lord jesu receive my soule”— highlighting his resilience and calm devotion in the face of profound suffering. Unlike traditional hagiographies, the focus is on the present suffering of martyrs rather than their release from pain.[v] 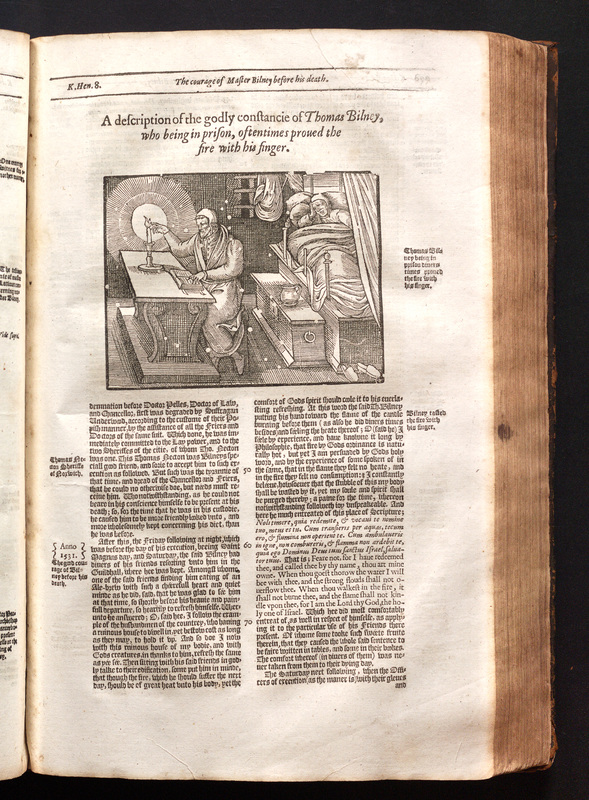 Another woodcut that emphasizes repetition and the sensory is one that depicts Thomas Bilney “proving” the fire with his finger. Twelve pages earlier, another large half-page illustration showed Bilney being plucked from the pulpit and thrown into prison. In his prison chamber, he touched the flame of a candle as a test of his tolerance for pain in preparation for his execution set for the next day. The text above the image reads: “A description of the godly constancy of Thomas Bilney, who being in prison, oftentimes proved the fire with his finger.” Similar descriptions of this event are also repeated in the marginalia and the text block itself. In one margin note, Foxe replaced the word “proved” with “tasted”. The repetition of this event in the text and the indication that this is a repeated act (“oftentimes”) reproduces the scene in the reader’s imagination, with all its sensory qualities, a number of times as the eye moves down the page.

In the 1596 edition, the same woodcut block was used to print both William Flower’s burning at Westminster and John Rogers’ in London with both martyrs exclaiming, “lord jesu receive my soule”— echoing Hooper’s prayer. Demonstrating a lack of standardization, especially in the 17th century editions, these images from the 1631 edition show a different woodcut being used for Flower and Roger. The final words of these martyrs are replaced with the equally interchangeable phrase, “lord receive my spirite."

Flipping through the pages of the book, the stories of the martyrs began to appear as one unified whole through this process of repetition. These woodcuts are not completely identical but have the same basic composition. Differing from traditional representations of saints who have recognizable iconographic attributes, these scenes are devoid of any historical specificity in terms of architectural features or clothing and the faces of martyrs are generic and completely anonymous.[vi] Foxe’s martyrs demonstrate the Protestant conviction that the divinely imputed righteousness of ordinary people can allow them to have the capacity to testify their beliefs despite suffering and death. These woodcut illustrations offer visual models to be emulated by other believers.[vii]

⁕ The reproducibility of martyrdom and print ⁕

It was crucial to Foxe that his text inspired imitation and repetition beyond itself.[viii] Through the repetition of printed imagery, Foxe attempted to connect martyrs of the early church to Marian martyrs within the text, and even further, to connect the martyrs of his text to future martyrs who may have taken inspiration from it. The same woodcuts were often used to depict more than one event throughout the book— staging the drama of martyrdom over and over again. In a project designed to reveal a continuous and self-replicating Protestant narrative, it mattered less that these were faithful or unique renderings of independent events. The outcomes of these stories would have been known to most readers through other textual sources or word of mouth. What generated meaning for readers was not so much how these events were described but rather how often they were repeated.[ix] By identifying the most compelling and sensorially striking images of the Reformation and hammering them home, Foxe was able to create a seemingly comprehensive iterative history of Protestantism that the reader could then imagine themselves participating in.

Foxe's images enlist our senses in advancing his message of papal cruelty and Protestant bravery and asks the reader to have a “taste” of the fire as Bilney did (whether it be through sympathy or participating in this continuity as a martyr themselves). These repeated images accrued a certain kind of “fixity” or cultural stickiness, which was made possible through the reproducible qualities of print. They adhered to English cultural memory and forwarded Foxe’s polemical message of the perils of the false church well beyond his own lifetime.

[ii] Evendeen and Freeman, Religion and the book in early modern England: the making of Foxe's "Book of Martyrs", 194.

[v] Truman, "John Foxe and the Desires of Reformation Martyrology," 37.

[viii] Truman, "John Foxe and the Desires of Reformation Martyrology," 56.

← The Role of Print and Scholars in the Reformation
Aldrovandi's Monsters: Imagining the Pregnant Body →
Imagining and Reproducing Martyrdom Through the Printed Image